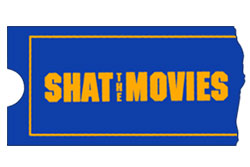 Some say listening to us is like hanging out with friends and discussing ’80s and ’90s movies: tossing around theories, crushing on yesteryear’s stars, geeking out over all the nostalgia. We take offense to that.

Shat The Movies wants to be your smartest friend, your hottest friend, your most caring friend … but with better sound quality. We’ve spent more than five years and 200 episodes discovering, along with our listeners, which movies still hold up, which movies sadly don’t, and what the true spirit of cinema was from 1980 to 1999 (plus “Alien,” “Halloween” and “Westworld”).

You’ll hear Dick Ebert speak for the everyman, Ash speaks for the intellectual elite, and Gene Lyons speak too much. We’re one big, sentimental, often drunk, secretly goth family deeply committed to interacting with our listeners, delivering outstanding audio quality, editing without mercy, and honestly telling you how many wipes each movie would take to get off your respective butts. (edited) 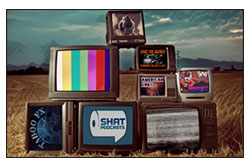 “Westworld” is a movie. It’s also a TV show. With that realization, the Shat The Movies team ventured into covering prestige television with HBO’s futuristic hit. Being “Game of Thrones” and “True Detective” fans, we went there, too.

Gene and Ash are hot for Neil Gaiman, so “American Gods” was a natural choice. And we kinda figured “Taboo” would be a lot more spooky and a lot less grunty.

“Lovecraft Country” was a real challenge, leading to some tough conversations that needed to be had, and “Watchmen” was a perfect fit, bringing in The King Bee’s encyclopedic knowledge of comic books.

Launching multiple episodes per week—instacasts, deep dives, listener mail, and Twitch live streams—we solve the puzzles together, enrich the TV you’re already watching, and hopefully surface some voices you might not otherwise hear. Shat on TV doesn’t aim to be the only podcast you follow for your favorite shows; we only want to add Shat’s view of the shows you love.